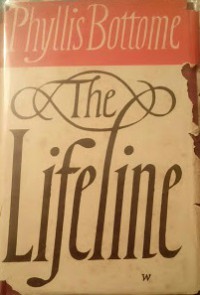 Mark Chalmers was, as far as he knew, exactly the kind of man he wanted to be. He earned enough money for his tasks; he had done nothing discreditable; women admired him; boys obeyed him; and men of his own age definitely disliked him, unless they had been more successful still; and then they thought that he was a very nice fellow and might go far. But he would not go far because he was already thirty-six.

The kind of job Mark was on was not greatly to his taste; but his friend Reggie at the Foreign Office was urgent about it, and had offered to pay his holiday expenses if he would undertake it.

Do you remember a few weeks ago when I discussed Phyllis Bottome's Murder in the Bud - the hilariously ridiculous book by the author that inspired Ian Fleming to start a career in writing? If you do, you may remember that I was looking to get my mitts on another book of hers - a book that Fleming is alleged to have copied from when he wrote his first James Bond novel - Casino Royale.

Well, The Lifeline is that very book.

When a trip to Edinburgh came up, I took the opportunity to seek out a copy at the National Library of Scotland and spend a few hours in the rather impressive reading room today to satisfy my curiosity about this book. It's totally geeky, I know, but it had to be done.

From here on there will be spoilers of both The Lifeline and Casino Royale - I'm not using spoiler tags. Be warned.

Edit (03.Feb.18): Many thanks to TA for finding out this morning that the book is available online here.

The Lifeline - What's the book about?

Bottome wrote The Lifeline in 1946, but the story is set in Austria, 1938. Austria had been annexed by Germany and the story starts with the introduction of Mark Chalmers, a Brit who loves Austria and who is feels a sense of loss at the political situation.

“Well yes,” Mark admitted a little warily, because emotion always made him feel wary, and he really felt the loss of Austria deeply. “I am bound to say I am attached to this country. This sudden occupation of Hitler’s is like seeing a friend strangled by some ghastly thug! Yes, I do dislike the Nazis very much – I think – I may as well say – that we as a people think this whole absurd set-up here, or in Italy, an atrocious nuisance.”

Mark  promised a friend at the Foreign Office that he deliver a message to a contact in Nazi-occupied Austria. Unbeknown to Mark, this favour will set him off on his own adventure in as an intelligence officer.

While on holiday, Chalmers meets his contact in Austria and delivers the message. When he does, he learns about the precarious situation that his contacts friends are in and is persuaded to take some action. As a result Chalmers agrees to return to Austria under a false identity, that of a patient at a mental hospital and the brother of a famous artist.

The hospital is run by Dr. Ida Eichhorn, also a member of the underground, who enables Chalmers to come and leave the grounds as he requires to gather and pass on intelligence to his other contacts.

One of these contacts is Lisa, a young Austrian woman living on a farm, who starts to care for Chalmers. They literally steal horses together. Well, not steal but smuggle. They smuggle Lippizaners (think Spanish Riding School) out of the country to rescue them from being killed by the Nazis.

“The Third Reich thought that horses of such an unutilitarian character were an insult to the Intelligence of the New Man. The New Man, you see, is not to think and a horse that thinks might remind him of a former occupation of his own.”

(Note: I cannot find any sources that might support this claim as a fact, but would be curious to learn more. All I can find is that the horses were smuggled out at the end of the war for fear that they may be used for food by the advancing Russian army.)

One night, things go wrong. Chalmers is detected and tries to make a run for it. In the process, Lisa is killed by a raging bull named Franz Josef.  - Yes, I know, but please bear with me, because this is not the most laugh out loud part of the book: there is also a twist involving a mad aristocrat who is kept at the hospital that puts a Bronte-like twist on things and that was hilarious.

Chalmers is caught and tortured by the Gestapo. He is then transferred to a mental institution for detention - and it turns out that this is the same place that he used as a cover. Dr. Eichhorn and his friend Father Martin, a Jesuit priest, nurse him back to health - one focusing on his physical recovery, and one addressing his mental one.

Chalmers recovers, realises that he is in love with Dr. Ida Eichhorn (whom he previously didn't like), and both are married by Father Martin before Chalmers returns to England.

The Lifeline - How was it?

Honestly, I had very low expectations of this book after my experience with Murder in the Bud, but as I read through the first few chapters of the story,  I changed my mind and started to really enjoy it.

For the purposes of this little project, I was not at first looking to read the complete story. I was looking to learn about Chalmers and in which ways he may or may not compare with James Bond. As it turns out, I had to keep reading to find out what happened to Chalmers and Ida and Father Martin. I cared, which, incidentally, is not something I have ever said about a Bond novel.

Where Murder in the Bud was lacking action and gushed forth with theories about psychology, The Lifeline was packed with action and only used reflection sparingly - but when Bottome did discuss a point, she cut straight to it. I liked that.

For example, Chalmers is considering politics and how they affect personal integrity. Chalmers is a man who has been brought up with certain values such as that man must take action and that taking action is a sign of courage and honour. But in a post-WWI world this is not necessarily true. How far removed were courage and honour in a battlefield? And, if honour and courage derived from action alone, then surely an enemy is just as honorable and courageous as one's own side. And does the separation of "us and them" really exist?

So, when Chalmers states an old adage that “A man must keep his honour by his courage.”, he is quickly drawn into a more complex consideration by Father Martin:

“Something quite new is happening,” Father Martin said slowly, looking away from Martin, out of the dusty window, into the darkening summer air. “There used to be that way of keeping honour by courage. But courage has ceased now, to be by itself, a virtue. It has to be connected up with other qualities to-day!”

Bottome wrote this in 1946. She had the benefit of experience and hindsight. Bottome herself was connected to the secret service. Her husband was a section head in various locations in Europe, and yet, she chose to focus not on Chalmers as a hero of the story but on the collaboration between Chalmers and the other characters.

Not so Bottome, and I found this refreshing. A spy thriller, that is action-packed and sensitive to the complexities of international politics. I was impressed, and not even some of the silly plot elements - Chalmers' love interest being killed by a raging bull in a meadow! - could detract from that.

So, did Fleming copy from Bottome?

Some of the plot of Casino Royale closely follows that of The Lifeline. This cannot be denied. Both Chalmers and Bond go under-cover, both are tasked to work with a woman they don't like at first fall in love with at the end.

“A cat”, she observed with a friendly grin, “may look at a king – nothing that the king does can prevent it – but is it worth the cat’s while to do it since it is no answer? That is left to the king! I read in your eyes “I despise you, my good woman”, but that I knew already. And I must assert that as long as I have not done anything for which to despise myself I can quite easily bear it.”

Mark’s armour still held. “I beg your pardon,” he said in his most dispassionate and distinguished manner, “but I am afraid that your extreme skill in understanding other human beings sometimes carries you off too far – or not far enough. I am not quite sure which – in either what we think of each other is rather beside the point.”

Both get captured, are tortured, rescued at the last minute, and are sent to a hospital to recuperate.

The last part is the most similar on both books - where Chalmers is nursed back to health by Ida and Father Martin, Bond experiences the same setup with Vesper Lynd and Rene Mathis. In fact, the first page of that particular chapter sounded a lot like the text in Casino Royale.

“The days slipped past slowly into weeks before Mark realized that he was mending outwardly but not inwardly. His broken body had knit; his bruises had healed; physically he could be a man again; but his heart would not heal. Every day when Ida came he locked her out of it. He did not want her to find the hollowness within. It was easy to shut her out, for she demanded nothing from him.

He simply felt that he had nothing more to offer. The Gestapo had cleared him out. At the very core of his being there was nothing now but panic and emptiness. He was without courage, and without dignity”

However, while Fleming may have used some of the same plot elements, his characters and his whole outlook are entirely different. Having read both books now, I am a little sad that Fleming's books have endured for such a long time, while Bottome has been largely forgotten. Not just forgotten, but her books have been out of print for a long time, too.

The fact that I had to specifically seek out a copy of The Lifeline at a National Library, which involved quite a bit of effort, and that her books - especially this one - have not been reprinted - despite the connection with the cultural icon that is James Bond! - just makes me wonder which other gems we are missing out on.

I'll leave with this, which is the essence of Bottome's attitude, and which is something you'd never find in a stereotype-loving Bond novel:

“Evil is a individual as good,” Father Martin objected, “as long as there is a less bitter way can you not take it? It is a man’s choice that proves life good or evil.”

the name is not bond