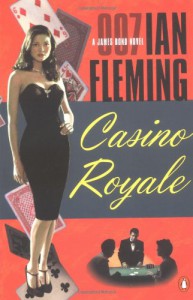 "Well, it was not too late. Here was a target for him, right to hand. He would take on SMERSH and hunt it down. Without SMERSH, without this cold weapon of death and revenge, the MWD would be just another bunch of civil servant spies, no better and no worse than any of the western services."

And so begin the extraordinary adventures of the most famous of all spies. Had it not been for his involvement in bringing down the villain known as Le Chiffre, James Bond could just have been another one of such civil servant spies.

Unfortunately, this is the only aspect of the Casino Royale story that I actually liked. The idea of James Bond and his mission is what draws me to the books, but not in fact the character of James Bond himself.

James Bond as a character is an utterly unlikable, chauvinist, self-centered idiot, who happens to be good at playing cards but is otherwise pretty lucky to have anything go his way - whether it is his involvement with women or his actually staying alive.

I first read Casino Royale some years ago, shortly before the film was released, and really liked it for the plot and the fact that a card game could pose more danger to the world's biggest villains than any attempts of arrest or assassination. Incredible! However, I enjoyed that the book dwelt on thinking through Bond's moves at the baccarat table more than on action scenes.

However, on this particular re-read of the story, I felt more drawn to paying attention to the way Bond interacts with the world around him and was reminded why in some of the subsequent books I tend to root for the villains - I just can't stand James Bond.

Would I still recommend this book? Yes. I think it is important to demystify the legend (and the franchise - even tho I do enjoy the films!) and acknowledge that there was a time when the most popular of books was based on a character that was a snob, a chauvinist, a racist, a misogynist, an egotist, and an utter idiot.