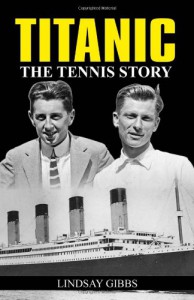 What I mean is, the stories of both Karl Behr and Richard Norris Williams II surviving the sinking of the Titanic are pretty amazing.

Just to think that Williams survived the disaster, narrowly escaped losing both his legs to frostbite (from kneeling in the freezing water until he was rescued) by walking around onboard the Carpathia to restart circulation in his legs, and on top of that came to win the first of a long row of tennis titles only a year after his ordeal, is pretty inspiring.

So why, why do their stories need to be wrapped up as romanticised drivel?

There are other aspects of the book that irked me:

1. That the author is so awestruck by the opulence of the lifestyle available to first-class ticket holders. Makes me wonder whether the chips on the fictionalised protagonists' shoulders are not really a reflection of the author's own.

2. That the story is told so overly dramatic. It is not necessary. The events are pretty dramatic already.

3. That the tone of book doesn't match the time. The language and tone would fit better in a 1920s or 1930s setting but just does not sound authentic for a story that is supposed to be set in 1912. For example, it is just not credible that the people surrounding the main characters readily accept the cause of women's suffrage.