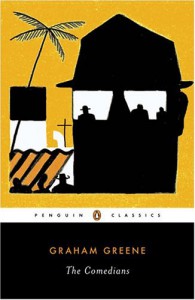 " ‘Any news of the Baron?’ It was the name some gave to the President as an alternative to Papa Doc – we dignified his shambling shabby figure with the title of Baron Samedi, who in the Voodoo mythology haunts the cemeteries in his top-hat and tails, smoking his big cigar. ‘They say he hasn’t been seen for three months. He doesn’t even come to a window of the palace to watch the band. He might be dead for all anyone knows. If he can die without a silver bullet."

So far, The Comedians is my favourite Greene novel and probably the one proving most difficult to review.

The story of Smith, Jones, and Brown - which incidentally starts like a joke - strikes a perfect balance between comedy created by what seems to be light-hearted ignorance and the tragedy that arises out of the other, darker side of the story which is revealed only through one of the three, the main character, Brown.

Knowing a little about the historical background to the story's setting - Haiti during the rule of Papa Doc Duvalier - helps, but even without this information, Greene strikes a perfect balance between the desperate and the comical. The references to voodoo and the haunting figure of Papa Doc just emphasize that bleak irony that shines throughout the story.

"Now that I approached the end of life it was only my sense of humour that enabled me sometimes to believe in Him. Life was a comedy, not the tragedy for which I had been prepared, and it seemed to me that we were all, on this boat with a Greek name (why should a Dutch line name its boats in Greek?), driven by an authoritative practical joker towards the extreme point of comedy. How often, in the crowd on Shaftesbury Avenue or Broadway, after the theatres closed, have I heard the phrase – ‘I laughed till the tears came.’ "