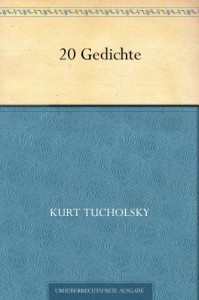 I picked this up because I am a fan of Kurt Tucholsky's and this was a kindle freebie.

20 Gedichte (20 Poems) is a small and somewhat unusual collection of poems written between 1913 and 1931. It is unusual in that it features mostly poems about relationships - which, to be honest, I was not familiar with in Tucholsky's canon of work - other than the themes in Schloss Gripsholm and Rheinsberg.

It was an unusual selection but it was quite interesting, too, as some of the poems were written from a woman's perspective.