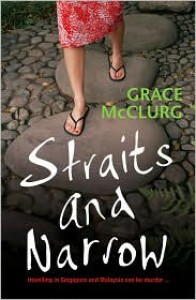 Apologies. This is gonna be more of a rant than a review.

I wanted to like this book. I really did, because the book reminds me of adventure - well, as close to adventure as I'll dare myself to go - in the Malaysian jungle. That is where I bought the book on a night surrounded by sounds that I was sure would keep me awake worrying about the creepy-crawleys that I knew where outside.

Anyway, I was out like a light as soon as my head touched the pillow and I never got around to reading Straits and Narrow until a year later.

Unfortunately, I have read a lot of good books lately, with well developed characters and mind-blowing storylines. So, when being thrown into the world of Straits and Narrow, with a somewhat naive / silly female main character who puts up with her idiot boyfriend but secretly longs for that creepy "doctor" dude she meets one morning when being chased by dogs - well, it just did nothing for me. It was easy enough to imagine the book's setting and the characters as it is set among a group of - quite arrogant - twenty-somethings who are travelling Asia / Malaysia on a budged (Been there seen them!) but I really didn't want to spend any time with them.

I'm pretty easy-going, especially when travelling, and take an interesting all aspects of life's rich tapestry, but had I met these people in real life, I probably would have made an effort to avoid them, too. Gee, thinking about, I have been known to avoid groups like these.

The book has a slow start, contains a lot of background information on the characters - more than is needed -, and then doesn't really go anywhere fast. So, about 65% into book, I could not give a damn about which one of the characters is the killer.

And I sure did not care whether Rachel, the main character, is so bad at judging people that she should re-think her career choice as a forensic pathologist. Really, who in their right mind would claim to be a forensic pathologist if they only just graduated from uni and have not even worked in the field, yet!

Anyway, this one is a DNF. The writing was quirky and trying to be funny at times, but just couldn't pull of an interesting story.