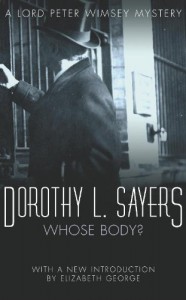 " ‘You see, Lady Swaffham, if ever you want to commit a murder , the thing you’ve got to do is to prevent people from associatin’ their ideas. Most people don’t associate anythin’ – their ideas just roll about like so many dry peas on a tray, makin’ a lot of noise an’ goin’ nowhere, but once you begin lettin’ ’em string their peas into a necklace, it’s goin’ to be strong enough to hang you, what?’ ‘Dear me!’ said Mrs Tommy Frayle, with a little scream, ‘what a blessing it is none of my friends have any ideas at all!’"

There is a certain resemblance between Lord Peter Wimsey and Bertie Wooster and the worlds they both inhabit. Of course, the obvious similarity is that both are somewhat nit-witted upper-class toffs who are aided through life both their valets and a group of strong-willed female relatives - Bertie by his aunts and Peter by his mother.

For the first part of Whose Body? I just could not get over this similarity, because it seemed that Mrs Tommy Frayle's circle of friends may as well have included most of the book's characters, including Lord Peter. I just could not find an angle to his character that showed him to be more than a two-dimensional caricature of the Wooster archetype.

However, then it  happened: Whose Body? presented a pivotal moment that changed my appreciation of Lord Peter and his relationship with Bunter, his old friend and servant. I don't want to spoil this experience of discovery for any prospective readers so I won't go into much detail, but the main reason I came to appreciate Lord Peter - and to be fair this is the only memorable part of the story for me even after only a few short weeks of reading the book  -  is that he is portrayed as a man of his times. Sayers lifts Wimsey out of the cliche and attributes him with a real world experience and complexity that is lacking not only in Bertie Wooster - who of course was always meant as a caricature - but also other notable fictional contemporaries (maybe with the exception of Poirot).

Had it not been for this sub-plot, I am not sure I would have enjoyed the story much at all.