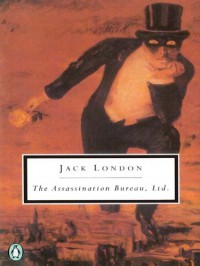 “You know it is our rule never to fill an order until we are satisfied that it is socially justifiable,” Dragomiloff observed quietly.

The Assassination Bureau is an organisation hired killers managed by the enigmatic Dragomiloff, but they do not just kill anyone for money. Oh, no. Their credo is that the killing must benefit society. And Dragomiloff and his madmen go to quite some lengths to ensure the background checks on their victims are thorough. However, one day, a client manages to convince Dragomiloff that he takes exception to one of their projects and hires The Assassination Bureau to assassinate Dragomiloff because of his mistake - the unjustifiable killing of a previous victim. And so the hunt begins...

When I thought of Jack London, I thought of Call of the Wild, White Fang and of the short stories about hobos traveling the country jumping from one railway to another that we read in eight grade English Lit class.

The very last story I would have associated Jack London with is The Assassination Bureau, which prior to reading I only knew as a film starring Oliver Reed and Diana Rigg. Having seen the film, I always thought of The Assassination Bureau being set in Europe in the 60s. I can't remember whether the film contained this or whether my memory just associates it with this setting because of the actors, but this is the image I get. So, it was quite a shock when I read that the actual book was set in the US in 1911.

I mean, to think of 1910/11, years before the Russian Revolution, still years before the Great War even, and have a story that defies the social and philosophical boundaries which seemed to have enveloped most of the western world - it is just astounding.