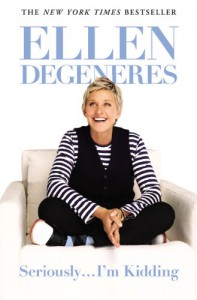 I picked up Seriously...I'm Kidding as an audiobook the other week and thought it was safe to listen to it in the car - silly me!

There were several moments last weekend when I was quite glad that, where I was driving, only few people tried to use the same road. Otherwise, it is quite likely that either of the following would have happened: a) accident caused by erratic driving due to bouts of uncontrollable giggles; or b) people thinking I'm crazy - also due to bouts of uncontrollable giggles.

I'm not saying it's the best or funniest book ever, and it certainly has a few elements that are predictable - like, after a few chapters you get the hang of how her humor is structured and there are quite a few self-promoting references to her talk show - but it honestly had me in stitches at times and then balanced it out with some more inspirational points of view.

One aspect that was new to me - and maybe it is because I haven't read many books like this - was that the audiobook was actually addressed to the listener, almost as part of a conversation, which made the listening experience very engaging.

Had it been the print version, I wonder if the references had been adapted to achieve a similar effect with the reader? I have a hunch it might have...