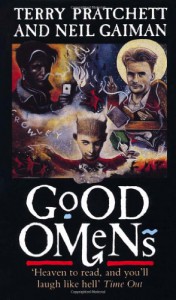 “God moves in extremely mysterious, not to say, circuitous ways. God does not play dice with the universe; He plays an ineffable game of His own devising, which might be compared, from the perspective of any of the other players, to being involved in an obscure and complex version of poker in a pitch-dark room, with blank cards, for infinite stakes, with a Dealer who won't tell you the rules, and who smiles all the time.”

This basically sums up the plot of Good Omens – because even though I read it only in the last week, I am having difficulty remembering what exactly the plot of the story was. What I do remember is that there are a demon and angel, who are trying to stop the impending Armageddon from happening because they both rather enjoy living on earth as we know it.

Sounds pretty straight forward? Yes, but there are a plethora of sub-plots and incidental stories that may or may not have anything to do with the efforts of the unlikely friends to prevent the end of the world.

There is the story of a convent, most of whose members were “were old-fashioned Satanists, like their parents and grandparents before them. They'd been brought up to it and weren't, when you got right down to it, particularly evil. Human beings mostly aren't. They just get carried away by new ideas, like dressing up in jackboots and shooting people, or dressing up in white sheets and lynching people, or dressing up in tie-dye jeans and playing guitars at people. Offer people a new creed with a costume and their hearts and minds will follow.”

And of course there is the story of Agnes Nutter, whose prophecies are the cause of all the commotion but who in her lifetime was an incredibly unsuccessful medium. Unbeknownst to her, Agnes was too talented for her own good. As Good Omens explains, “most psychic abilities are caused by a simple lack of temporal focus, and the mind of Agnes Nutter was so far adrift in Time that she was considered pretty mad even by the standards of seventeenth-century Lancashire, where mad prophetesses were a growth industry.”

There are quite a few layers to Good Omens. Of course, there is the story in itself. But then there are many, many elements in the story that have been taken from other parts of literature from the Bible to the lyrics of Queen that each chapter plays out as brilliant game of name the song/book/play/character/cultural reference.

Brilliant read (as long as you don’t mind digressing)!

Btw, as someone who delights in reading warranty clauses on a regular basis, this paragraph was just too precious not to share:

“Along with the standard computer warranty agreement which said that if the machine 1) didn't work, 2) didn't do what the expensive advertisements said, 3) electrocuted the immediate neighbourhood, 4) and in fact failed entirely to be inside the expensive box when you opened it, this was expressly, absolutely, implicitly and in no event the fault or responsibility of the manufacturer, that the purchaser should consider himself lucky to be allowed to give his money to the manufacturer, and that any attempt to treat what had just been paid for as the purchaser's own property would result in the attentions of serious men with menacing briefcases and very thin watches. Crowley had been extremely impressed with the warranties offered by the computer industry, and had in fact sent a bundle Below to the department that drew up the Immortal Soul agreements, with a yellow memo form attached just saying: "Learn, guys..."