The Missing of the Somme 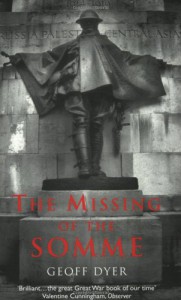 "Gradually I become aware that the air is alive with butterflies. The flowers are thick with the white blur of wings, the rust and black camouflage of Red Admirals, silent as ghosts. I remember the names of only a few butterflies but I know that the Greek word psyche means both ‘soul’ and ‘butterfly’. And as I sit and watch, I know also that what I am seeing are the souls of the nameless dead who lie here, fluttering through the perfect air."

This is one of the closing paragraphs of Geoff Dyer's book, and it is only one example of the beautiful style of narration which guided me through the meanderings of Dyer's thoughts.

The Missing of the Somme is hard to categorise, hard to describe. Like its topic. What Dyer does try and do is to trace a journey through fictional and factual memory of the First World War and like a pilgrim, stopping at different sights, take in the impact which the war made on the generation that experienced it, and those that would follow. On his travels to the battle fields, Dyer looks at war poetry, sculpture, painting, photography and connects it with the factual accounts of diaries, letters, newspaper reports, and other records he finds in the Imperial War Museum in London, the starting point of his excursion. And the result is a beautiful cross reference between the mythology of war and the realities of it.