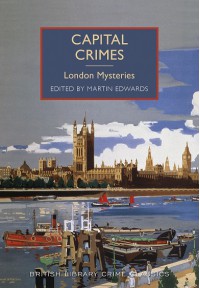 This week has been slumpish. I haven't felt like diving into any heavy reads or even full length novels or really anything that required a lot of focus. So, poetry and short stories and Paul Temple, and even this only a few minutes at a time, were the only reads I engaged in this week. Not that poetry doesn't require some focus etc. ... but poems are short and you don't generally need to remember a plot or characters from one poem to the next.

Anyway, I did manage to start Capital Crimes, which is a collection of short stories with London as a theme.

The first story in the book was The Case of Lady Sannox by Arthur Conan Doyle.

I have read this story before in a superb collection of ACD's (non-Holmes) short stories called Gothic Tales, and I found it stomach-turning then. On the re-read, it's still makes me wince, but then I am not a fan of horror ... and this falls into the horror genre for me.

However, I think I also appreciated the story a little more on the re-read for its pointing out issues regarding xenophobia and domestic violence. It's one of ACD's stories that I thought was quite modern, ahead if its time even, for story first published in 1893.

Btw, all of ACD's stories are available online for free.

I am not sure I will write an update for all of the other stories in Capital Crimes, but for reference the stories included in the collection are:

A Mystery of the Underground - John Oxenham

The Stealer of Marble - Edgar Wallace

Wind in the East - Henry Wade