The Freaks of Mayfair 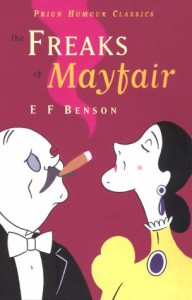 The Freaks of Mayfair is a series of portraits of fictional inhabitants of Mayfair. The stories, in so far as they are stories rather than vignettes, are not related to each other, and I think the book would have worked better for me if they had been.

Without this connection, the portraits, while funny in part, are not all that memorable. I think, I would have enjoyed these better if they had been connected because it would have allowed the characters to interact and develop another dimension outside of the small snippet we get in each story. I guess, what I was missing was that characters cross over into the stories of other Mayfair inhabitants, much like characters in Wodehouse's Wooster stories pop up throughout various books and we get to recognise people we have already met.

So, while this was an amusing way to spend a few hours, The Freaks of Mayfair is not on par with the Mapp and Lucia stories simply because the is too little of the various characters before we move on to the next story, whereas we get to follow Mapp and Lucia through several trials of their relationship.

Still, there was one story called Aunt Georgie that seems to introduce us to the blueprint for George Pillson in the Mapp and Lucia series, and it was fascinating that Benson must have already assembled the cast of Mapp and Lucia when he wrote The Freaks of Mayfair in 1916.