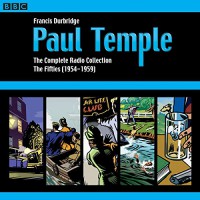 After spending much of this afternoon and evening reading non-fiction about various crimes against humanity, and given that watching the news at the moment is equally depressing, I'm in need of another bit of comforting distraction: I have turned to Wallace and Sayers over the last week, so just for a change, I'll throw in some Durbridge.

I came across these fabulous compilations of the old BBC Radio productions. I finished the first installment (The Early Years) last year and enjoyed it very much. These collections come with some additional material - material that is no longer viable to publish/release because the quality has deteriorated or it is incomplete, etc.

It's probably material that only appeals to fans of the series, rather than new listeners, but I appreciated it.

This second installment in the collection turns to the 1950s and contains five complete radio dramas:

I won't listen to them all back-to-back so this will be a longer-term project, but I love that these radio productions are available again.