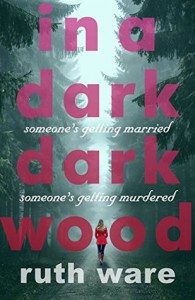 ‘James is … was …’ I swirled the drink in my glass, the ice cubes chinking as I tried to think how to phrase it. ‘My ex,’ I said at last.

It was true – but so far from the whole truth that it felt almost like a lie.

‘We were together at school.’

What could I say? No, I haven’t seen him since the day he texted me. No, I’ve never forgiven him for what he said, what he did. No. ‘I … not exactly. We sort of lost touch.’

So, far into the story - thanks to the telling in flashbacks, while our MC is recovering from amnesia in hospital (not really a spoiler, we know this from the first few pages) - I think there are some obvious red herrings in this one, and I think one of them is

the obviously unhinged "friend". The other is the MC

I also get a whiff of a particular Christie plot

from this story, so I am inclined to suspect that the person most likely to be connected with the victim is

his wife to be, the character who's been a bit of a bully to the others at school and who seems to be a calculating, controlling character with some sort of grudge. Why else would she invite the MC (that she had not spoken to in 10 years) to her hen weekend and deliberately withhold that the groom to be is the MC's old high school boyfriend?

Yes, I am still reading this. It's a ridiculous book, and I want to know if the solution to this is equally ridiculous.