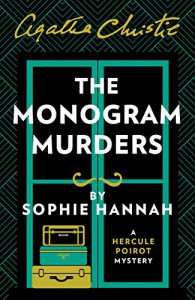 ‘Oui,’ said Poirot, struggling to remain patient. ‘And what did you see?’

‘Oh, there was plenty about the murders, most of it saying the police aren’t getting very far and asking for anyone who saw summat to come forward. Well, I did, as you know, Mr Poirot, and forward I came. But, like I said the other day, at first I couldn’t put a name to a face. Well, now I can!’

‘That is excellent news, Mr Kidd. It will be more excellent still if you can put that name into the next sentence that you speak, so that I may hear it.’

This investigation is the worst.

I mean, Poirot puts in a decent effort and makes some progress, but our Inspector from Scotland Yard, Catchpool, is and idiot.

I know. We've already established this.

But seriously, how did this moron become a policeman of any rank, never mind leading an investigation into three unexplained deaths?

Oh, and he is terrified of death and seeing dead people, which clearly works out well in his job.

While he is researching in a village, why does he go to a pub and a graveyard of all places instead of consulting with the local constable about the people that he is interested in?

Just in case, this was not clear yet, this book is crap.