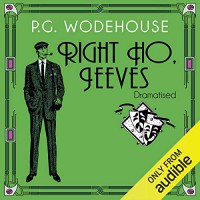 I meant to write this update earlier this evening, but got side-tracked.

Obviously, I opted for some light entertainment this evening, just to chill out with and to lighten the mood.

This scene is one of my all-time favourite ones by Wodehouse. It seems to be based on the requests frequently issued by Sherlock Holmes to his friend Dr. Watson, the most famous of which can be found in The Adventure of the Creeping Man:

"Come at once if convenient--if inconvenient come all the same. S.H."

In Right Ho, Jeeves, Wodehouse plays on this...but Bertie is no Watson:

"The first of the telegrams arrived shortly after noon, and Jeeves brought it in with the before-luncheon snifter. It was from my Aunt Dahlia, operating from Market Snodsbury, a small town of sorts a mile or two along the main road as you leave her country seat.

It ran as follows:

Come at once. Travers.

And when I say it puzzled me like the dickens, I am understating it; if anything. As mysterious a communication, I considered, as was ever flashed over the wires. I studied it in a profound reverie for the best part of two dry Martinis and a dividend. I read it backwards. I read it forwards. As a matter of fact, I have a sort of recollection of even smelling it. But it still baffled me.

Consider the facts, I mean. It was only a few hours since this aunt and I had parted, after being in constant association for nearly two months. And yet here she was— with my farewell kiss still lingering on her cheek, so to speak— pleading for another reunion. Bertram Wooster is not accustomed to this gluttonous appetite for his society. Ask anyone who knows me, and they will tell you that after two months of my company, what the normal person feels is that that will about do for the present. Indeed, I have known people who couldn't stick it out for more than a few days.

Before sitting down to the well-cooked, therefore, I sent this reply:

To this I received an answer during the after-luncheon sleep:

What on earth is there to be perplexed about, ass? Come at once. Travers.

Three cigarettes and a couple of turns about the room, and I had my response ready:

How do you mean come at once? Regards. Bertie.

I append the comeback:

I mean come at once, you maddening half-wit. What did you think I meant? Come at once or expect an aunt's curse first post tomorrow. Love. Travers.

I then dispatched the following message, wishing to get everything quite clear:

I sent this one off on my way to the Drones, where I spent a restful afternoon throwing cards into a top-hat with some of the better element. Returning in the evening hush, I found the answer waiting for me:

Yes, yes, yes, yes, yes, yes, yes. It doesn't matter whether you understand or not. You just come at once, as I tell you, and for heaven's sake stop this back-chat. Do you think I am made of money that I can afford to send you telegrams every ten minutes. Stop being a fathead and come immediately. Love. Travers.

It was at this point that I felt the need of getting a second opinion.

I pressed the bell.

"Jeeves," I said, "a V-shaped rumminess has manifested itself from the direction of Worcestershire. Read these," I said, handing him the papers in the case.

"I think Mrs. Travers wishes you to come at once, sir."

"You gather that too, do you?"