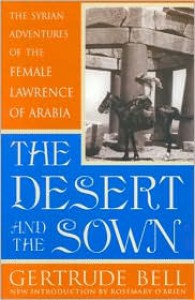 Despite my original misgivings, Bell's narrative has now turned from dropping names I needed to look up on the web (and still derived no context from them) and descriptions of items of archaeological interest to an actual description of the customs of the people she encounters, the relationship between different tribes, and her experiences while traveling.

In short, the book has now become interesting, even tho it still takes a lot of effort to try and ignore the somewhat condescending tone of Bell's narration at times.

About the "ghazu" or raids by one tribe on another:

"How many thousand years this state of things has lasted, those who shall read the earliest records of the inner desert will tell us, for it goes back to the first of them, but in all the centuries the Arab has bought no wisdom from experience. He is never safe, and yet he behaves as though security were his daily bread. He pitches his feeble little camps, ten or fifteen tents together, over a wide stretch of undefended and indefensible country. He is too far from his fellows to call in their aid, too far as a rule to gather the horsemen together and follow after the raiders whose retreat must be sufficiently slow, burdened with the captured flocks, to guarantee success to a swift pursuit. Having lost all his worldly goods, he goes about the desert and makes his plaint, and one man gives him a strip or two of goats’ hair cloth, and another a coffee-pot, a third presents him with a camel, and a fourth with a few sheep, till he has a roof to cover him and enough animals to keep his family from hunger. There are good customs among the Arabs, as Namrūd said. So he bides his time for months, perhaps for years, till at length opportunity ripens, and the horsemen of his tribe with their allies ride forth and recapture all the flocks that had been carried off and more besides, and the feud enters on another phase. The truth is that the ghazu is the only industry the desert knows and the only game. As an industry it seems to the commercial mind to be based on a false conception of the laws of supply and demand, but as a game there is much to be said for it. The spirit of adventure finds full scope in it — you can picture the excitement of the night ride across the plain, the rush of the mares in the attack, the glorious (and comparatively innocuous) popping of rifles and the exhilaration of knowing yourself a fine fellow as you turn homewards with the spoil. It is the best sort of fantasia, as they say in the desert, with a spice of danger behind it. Not that the danger is alarmingly great: a considerable amount of amusement can be got without much bloodshed, and the raiding Arab is seldom bent on killing. He never lifts his hand against women and children, and if here and there a man falls it is almost by accident, since who can be sure of the ultimate destination of a rifle bullet once it is embarked on its lawless course? This is the Arab view of the ghazu; the Druzes look at it otherwise. For them it is red war. They do not play the game as it should be played, they go out to slay, and they spare no one. While they have a grain of powder in their flasks and strength to pull the trigger, they kill every man, woman and child that they encounter.

Knowing the independence of Arab women and the freedom with which marriages are contracted between different tribes of equal birth, I saw many romantic possibilities of mingled love and hatred between the Montagues and the Capulets. “Lo, on a sudden I loved her,” says ’Antara, “though I had slain her kin.” Gablān replied that these difficult situations did indeed occur, and ended sometimes in a tragedy, but if the lovers would be content to wait, some compromise could be arrived at, or they might be able to marry during one of the brief but oft-recurring intervals of truce. The real danger begins when blood feud is started within the tribe itself and a man having murdered one of his own people is cast out a homeless, kinless exile to shelter with strangers or with foes. Such was Imr ul Kais, the lonely outlaw, crying to the night: “Oh long night, wilt thou not bring the dawn? yet the day is no better than thou.”