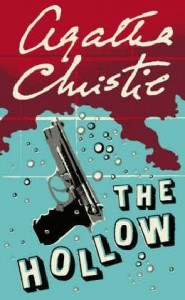 This is one of Dame Agatha's stories that is not an easy one to like - most, if not all, of the characters are horrible: self-involved, dismissive, contemptuous, sponging, and utterly, utterly selfish.

This comes at an expense.

I have no idea if Dame Agatha meant to write this as an analysis of the effects of bullying - I will need to consult John Curran's Complete Secret Notebooks on this matter - but I love the psychological aspect of this story. It's gripping and - for an Agatha Christie book - deliciously dark.

"Gerda had not been happy at school. At school there had been even less reassurance than elsewhere. Home had been better. But even home had not been very good. For they had all, of course, been quicker and cleverer than she was. Their comments, quick, impatient, not quite unkind, had whistled about her ears like a hailstorm.

Hadn’t they seen, all of them, that that was the way to make her slower and stupider still? She’d got worse and worse, more clumsy with her fingers, more slow-witted, more inclined to stare vacantly at what was said to her. Until, suddenly, she had reached the point where she had found a way out. Almost accidentally, really, she found her weapon of defence.

She had grown slower still, her puzzled stare had become even blanker."