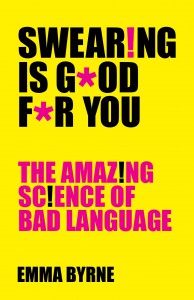 Fair warning - It's a book about swearing and quotes will contain swear words.

Professor Roger Fouts, founder of the Chimpanzee and Human Communication Institute in Washington, has spent his career adopting chimpanzees and studying their behaviour. He taught an extended family of chimpanzees to use sign language, and watched as they passed that language on to their children in turn.

It was this extended family of apes that first convinced me that chimpanzees can do more than simply communicate; they spontaneously learned to swear. These apes were taught language (and toilet trained) by Professor Fouts. In the process of picking up both language and taboos about bodily functions, the sign they used for excreta took on a special power. Like the human swear word ‘shit’, the sign DIRTY and the idea it conveyed became taboo. At the same time, DIRTY became a sign that the chimpanzees used emotionally and figuratively, also like the way you or I might use ‘shit’. If Roger made them angry they would call him ‘Dirty Roger’, the way we might say, ‘Roger, you shit.’ Unlike their wild cousins, these chimpanzees would throw the notion of excrement instead of throwing the stuff itself.