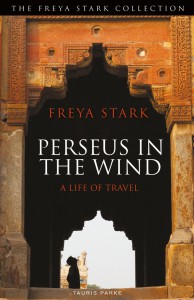 "I have not been much educated myself, so that I am a puny fighter in the ring, but for better or worse I would like to have learnt four things when the passing bell puts an end to schooling, and of these only one can be called intellectual. I would like to command happiness; to recognize beauty; to value death; to increase, to my capacity, enjoyment. Around the cardinal points, and inevitably attained by their attainment, I should place the conquest of fear, whose elimination must be the final aim of teachers. The rest of education deals with technical means for living, and is of secondary importance whatever economists may say. It is chiefly because they have reversed our order and made the technical intellect supreme that we are suffering in the world today."

This is from Stark's short meditation on Education. I could have quoted much of the book so far but this section is one I stopped at last night and it has been on my mind ever since.

At the heart of her contemplation is the fallacy she sees in the purpose of education being the pursuit of intellectualism and gain the ability to accumulate economic wealth.

Stark sees this as the loss of our ability to think for the pure enjoyment of thinking.