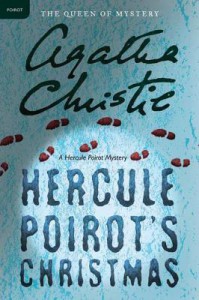 I have read this story several times now, and still the TV adaptation smudges my memory of the setting - Poirot does make his points about "the central heating" but it is in very different circumstances to those in the adaptation. I'm not complaining - I love the adaptation because they made the change in the best possible way and bring out the humor that I am certain Dame Agatha intended...after all the (absence of) central heating is a recurring theme.

And I love the setting in the book because it provides a connection with another Poirot story that I am fond of but which I won't mention because the scene in this book (Hercule Poirot's Christmas) actually includes a spoiler, which is also very unusual for Christie.

‘Nothing like a wood fire,’ said Colonel Johnson as he threw on an additional log and then drew his chair nearer to the blaze. ‘Help yourself,’ he added, hospitably calling attention to the tantalus and siphon that stood near his guest’s elbow.

The guest raised a polite hand in negation. Cautiously he edged his own chair nearer to the blazing logs, though he was of the opinion that the opportunity for roasting the soles of one’s feet (like some mediaeval torture) did not offset the cold draught that swirled round the back of the shoulders.

Oh, and I will be using this book for the Christmas Task.