There's nothing in this world can make me joy.

Life is as tedious as a twice-told tale,

Vexing the dull ear of a drowsy man;

That it yields naught but shame and bitterness.

A play dating from 1595 (or 1596) about England falling to pieces due to internal squabbling about whether and how to oppose the tyranny of Europe, ... erm, sorry, I meant the Pope. Definitely, the Pope.

If it weren't for elements of the play that somehow, don't know why, reminded me of current affairs, this would probably not be a play that I would remember for long. It's chaotic. There are a number of characters with shifting agendas. The harbingers of hope are held prisoner and/or are killed off. It's pretty bleak, in the same way that Richard II was a pretty bleak play.

I thought there were some significant other similarities to Richard II also:

Somehow, Philip the Bastard's (aka Richard Plantagenet's) "commodity speech" about the flourish of corruption and his last few lines of the play strongly reminded me of John of Gaunt's "Sceptred Isle" speech - especially that part of JoG's speech that is usually left out from popular recitals:

Consuming means, soon preys upon itself.

This royal throne of kings, this sceptred isle,

This earth of majesty, this seat of Mars,

This other Men, demi-paradise,

This fortress built by nature for herself

Against infection and the hand of war,

This happy breed of men, this little world,

This precious stone set in the silver sea,

Which serves it in the office of a wall,

Or as a moat defensive to a house

Against the envy of less happier lands;

This blessed plot, this earth, this realm, this England,

This nurse, this teeming womb of royal kings,

Renowned for their deeds as far from home

For Christian service and true chivalry

As is the sepulchre, in stubborn Jewry,

This land of such dear souls, this dear dear land,

Dear for her reputation through the world,
Is now leased out, I die pronouncing it,
Like to a tenement or pelting farm:
England, bound in with the triumphant sea
Whose rocky shore beats back the envious siege
Of watery Neptune, is now bound in with shame,
With inky blots and rotten parchment bonds:
That England, that was wont to conquer others,
Hath made a shameful conquest of itself."

For comparison, this is Philip's (referred to in the play simply as "The Bastard") "commodity" speech:

John, to stop Arthur's title in the whole,

Hath willingly departed with a part;

And France, whose armour conscience buckled on,

Whom zeal and charity brought to the field

As God's own soldier, rounded in the ear

With that same purpose-changer, that sly devil,

That broker that still breaks the pate of faith,

That daily break-vow, he that wins of all,

Who having no external thing to lose

But the word 'maid', cheats the poor maid of that—

Commodity, the bias of the world,

The world who of itself is peised well,

Made to run even upon even ground,

Till this advantage, this vile-drawing bias,

This sway of motion, this commodity,

Makes it take head from all indifferency,

From all direction, purpose, course, intent;

And this same bias, this commodity,

This bawd, this broker, this all-changing word,

Clapped on the outward eye of fickle France,

Hath drawn him from his own determined aid,

From a resolved and honourable war,

To a most base and vile-concluded peace.

And why rail I on this commodity?

But for because he hath not wooed me yet—

Not that I have the power to clutch my hand

When his fair angels would salute my palm,

But for my hand, as unattempted yet,

Well, whiles I am a beggar I will rail,

And say there is no sin but to be rich,

And being rich, my virtue then shall be

To say there is no vice but beggary.

Since kings break faith upon commodity,

Gain, be my lord, for I will worship thee.

Quite the sell-out, isn't he.

Anywho,... Internal power struggles and corruption leads to government that is definitely not "strong and stable" and throws the country into a total mess.

Who'd have thought it?

Clearly, the Bard's plays still hold a lot of things we can learn from, which is why I am really looking forward to catching - somehow, even if it is by cinema screening - the RSC's new production of the play in early 2020. Apparently, King John is not a play that is given an airing very often, so I am curious to see if the RSC has seen something else in it that makes it relevant to its current production schedule.

Other than this, there are two things I would like to note:

2. Clearly, I am still harbouring some grudge against Rupert Brooke for some his comments on Elizabethan drama, and I need an outlet for this grudge: I'm sure he wrote some of them out of conviction, and some of them to be contrary enough to impress whatever academic committee he submitted his work to. Either way, I disagree with his assessment that Shakespeare's "histories" are "utterly worthless". Factual or historical inaccuracy may not have been Shakespeare's forte, but that does not mean to say that the plays have no meaning or message. It seems to me, Brooke may have been missing their point. 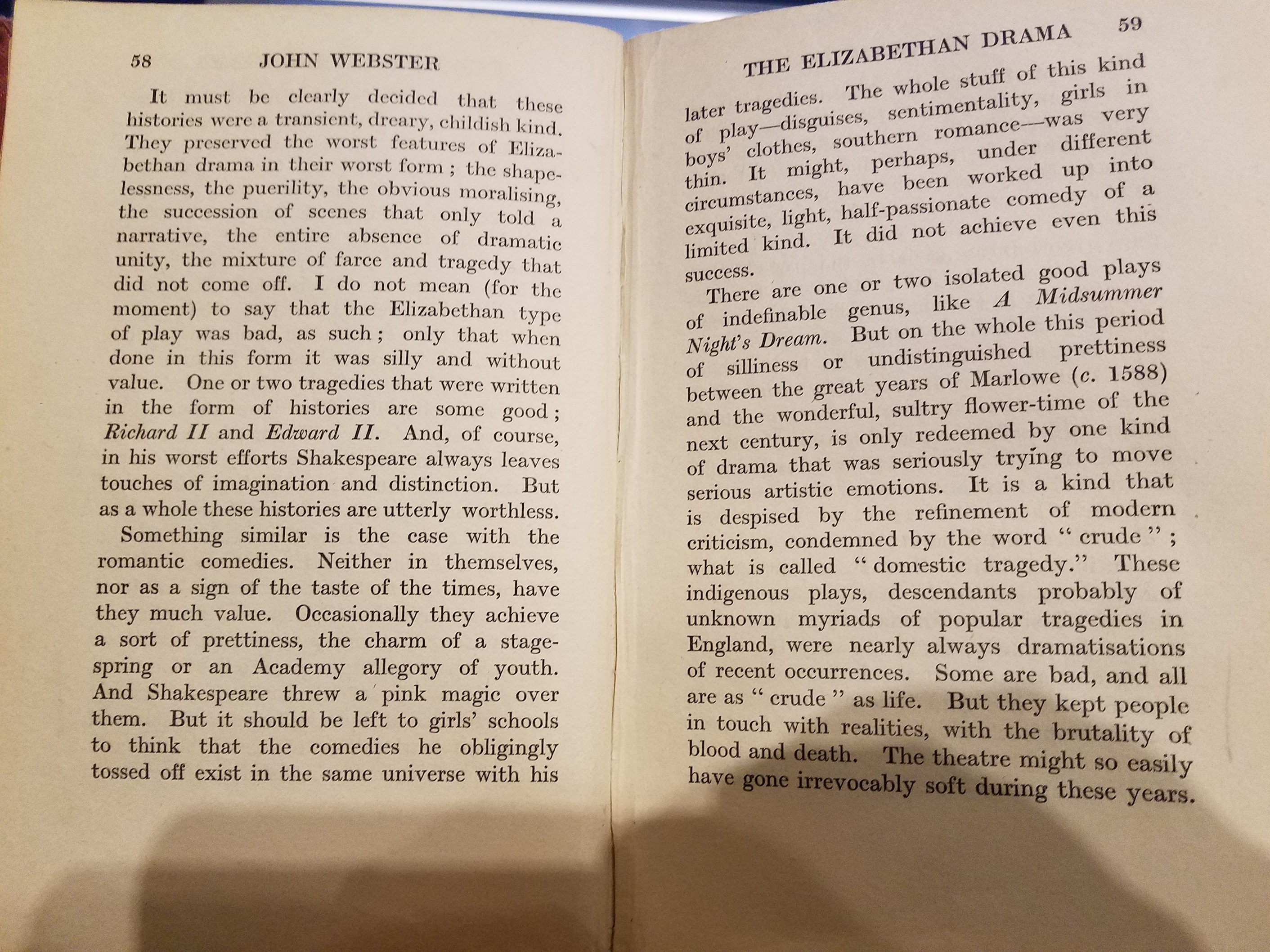