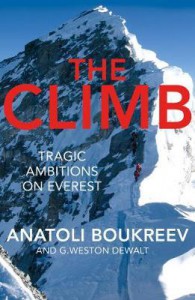 Like Ed Viesturs, I was not happy with conditions on the mountain. After more than two decades of climbing I had developed certain intuitions, and my feeling was that things were not right. For several days the weather had not been stable, and high winds had been blowing at higher elevations. I wanted very much for my feelings to be heard, but it had become increasingly clear to me that Scott did not look upon my advice in the same way as he did Rob Hall’s. I thought about my attempt to convince Scott to take our clients down to the forest zone to rest prior to our summit bid and his unwillingness to consider the proposal. My voice was not as authoritative as I would have liked, so I tried not to be argumentative, choosing instead to downplay my intuitions.

I've been shaking my head for the last 20 pages or so. Not at Boukreev, but at the way the expedition was managed.