She Died a Lady 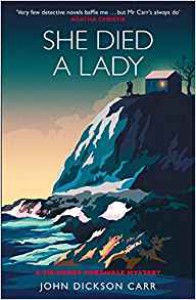 This book had such a promising start but once the main plot event happened and the police investigation gets under way, the story becomes ridiculously convoluted and stops making sense.

It was almost as if Carr had a really novel idea and then suddenly balked at executing it. Instead of a well-thought-out plot with a sound motive and fleshed out characters, we get caricatures and snippets of plot that seem to be formulaic. The only characters that I felt were truly well crafted were the two victims.

The ending was a let-down, too, I felt. There are certain similarities in the structure of this book with one Dame Agatha's and even tho I suspected the Carr had not copied the entire idea, it gave me enough pause to suspect the culprit reasonably enough.

There was no way I could figure out the motive, tho. There was just way too much going on in this plot to figure out any logical conclusions, and to be honest, the conclusion that was presented seemed to have been magically drawn out of a hat.

It just did not work for me. However, I look forward to trying some of Carr's other titles.