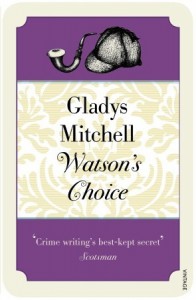 ‘I couldn’t say.’ He stood aside, smiling, and added, ‘Our own bust of Napoleon is in the hall, but this is another little present for Sir Bohun, I imagine, anyway.’

Mrs Bradley handed the parcel back to him with the remark that it was heavy, and preceded him into the room.

Bell placed the package on the table and began to undo the string.

‘Not another of those Sherlock gadgets?’ said Sir Bohun, obviously reluctant to have the parcel opened.

‘It looks like it, Sir Bohun,’ said Bell. ‘This is like all the other labels I’ve seen, and, now I come to look, the postmark’s the same.’

‘Is it? What is the postmark?’ demanded Sir Bohun.

He took the wrapping-paper and studied it carefully. ‘Blest if I can make it out. What do you say it is, Beatrice?’

‘Difficult to say,’ she replied, studying the label and then the wrapping-paper.

LoL. What brilliant scenes. All the detectives standing in a circle, with no idea what is going on.