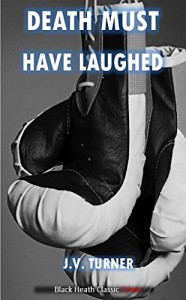 I need a palate cleanser after As Meat Loves Salt. One that I know is on the light side, and that I know will probably hold up in the quality department.

Death Must Have Laughed is the first of J.V. Turner's Amos Petrie stories, so having read and loved Who Spoke Last? (#2) and Below the Clock (#7), I am curious to find out how the series started.

"MR. JUSTICE MALLORY pulled at his dirty wig until the fringe met the top furrow on his yellow forehead. Then he turned his rheumy eyes towards the Crown counsel. “Death’s Head” Mallory became almost human at the start of each murder trial; the atmosphere of the Old Bailey braced him as though it had filtered into the court from Skegness. His long fingers played with a fountain pen as he coughed. Those who were strangers to that rasping sound imagined the old man to possess a cold. Others knew that this Judge of Assize released this croak to announce the time for the gallows hunt to commence. No counsel dare utter a word until that affected wheeze from Mallory’s worn chest signalled the rise of the curtain."