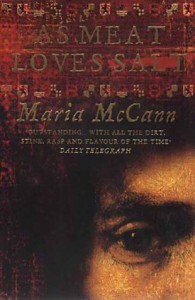 We had our book club meeting tonight, and as predicted, most people loved Guterson's East of the Mountains and for all the same reasons that I disliked it. Oh, well, it was still a fun discussion.

Our next read is As Meat Loves Salt, which comes with the following description:

"In the seventeenth century, the English Revolution is under way. The nation, seething with religious and political discontent, has erupted into violence and terror. Jacob Cullen and his fellow soldiers dream of rebuilding their lives when the fighting is over. But the shattering events of war will overtake them. A darkly erotic tale of passion and obsession, As Meat Loves Salt is a gripping portrait of England beset by war. It is also a moving portrait of a man on the brink of madness. Hailed as a masterpiece, this is a first novel by a most original new voice in fiction."

I hope this is as fab as it sounds, because I really like the sound of it. But I also have a bad track record with historical fiction, so we'll see.