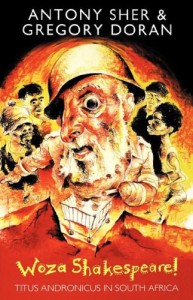 Alright, now that I finished the two reads on the authorship debate, I'm ready to move on to the next book in the Will's World project.

TA recommended Woza Shakespeare! to me, and as a fellow admirer of Tony Sher's work I've been really looking forward to this one.

I'm currently waiting for my next BL-Opoly roll so have already made a start on this, and I have to say that this looks to be a brilliant mix of memoir, history, acting, actors, Shakespeare and other experiences encountered on Sher's and Doran's tour of South Africa.