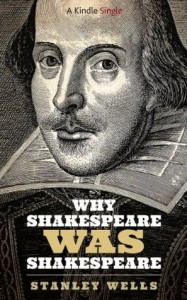 I had a curious encounter with one of Rutland’s supporters many years ago. I received a phone call from a visitor from Vancouver telling me that he had a photograph of an Elizabethan portrait of the Earl in which he was holding a copy of Hamlet. Would I like to see it?

Naturally I would, and I invited the elderly gentleman to my office. On arrival he produced a photograph of a genuine portrait of Rutland. But I saw no book.

‘There’, he said, pointing to a spot in the middle of the photograph. It was empty. A somewhat embarrassed conversation ensued, during which my visitor revealed that he was the reincarnation of the Earl. As he departed he told me that he had written a musical on the topic, as yet unperformed.

I truly love Stanley Wells: He's made Shakespeare's life and works accessible for decades and I have yet to find a more passionate and to-the-point promoter of any work of what we now call a literary classic.

What I had not appreciated so far is how many complete and utter nutters Wells must encounter on a regular basis. No wonder he doesn't hold back in his refutations of whatever bogus and completely unfounded claims enter the public sphere with respect to Wells' field of expertise.

Why Shakespeare WAS Shakespeare was an article that was published by Wells in 2014, seemingly in response to two other works in particular: the Emmerich film Anonymous and Diana Price's revised edition of Shakespeare's Unorthodox Biography (2012).

In it Wells summarises the very fundamental flaws in the Anti-Stratfordian argument, and he does so in a riveting gallop of snark mixed with solid argument and referencing for further reading.

More about Wells' myth-busting of the Anti-Stratfordian arguments can be found here: