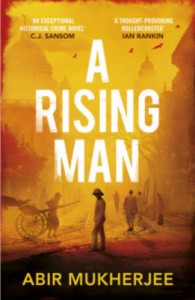 I am really digging Mukherjee's writing - and I love his use of historical background for the setting in 1919 Calcutta:

‘Why you want to go Tangra now, sahib?’ he asked as he pulled.

‘I want to go to Chinatown.’

There was only one reason for a European to go to Chinatown in the dead of night. But it would be out of place for a native to say so out loud.

The man was no fool.

I smiled grimly at the thought of what Mrs Tebbit would say if she knew where her prize lodger was off to at this hour. Still, the way I saw it, she was partly responsible. If she hadn’t given me the key to the front door, I’d still have been in bed. That was a lie.

The cravings were too strong. If she hadn’t given me the key, I’d have found some other means of escape, probably involving windows, bedsheets and drainpipes. One of the practical benefits of attending an English boarding school is that one receives a first-class education in the surreptitious access and egress from almost any premises.

Anyway, Mrs Tebbit’s hypothetical displeasure was irrelevant. What I was doing wasn’t illegal. Very few things are strictly illegal for an Englishman in India. Visiting an opium den certainly isn’t. Opium’s only really illegal for Burmese workers. Even registered Indians can get hold of it. And as for the Chinese, well we could hardly make it illegal for them, seeing as we’d fought two wars against their emperors for the right to peddle the damn stuff in their country. And peddle it we did. So much so that we managed to make addicts out of a quarter of the male population. If you thought about it, that probably made Queen Victoria the greatest drug peddler in history.