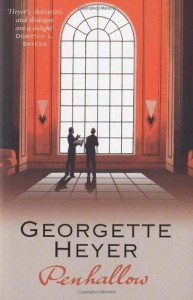 Since she was not country-bred, knew nothing about horses, and cared less, she was regarded by her brothers-in-law with an almost complete indifference. Being themselves unable to imagine a more desirable abode than Trevellin, and having grown up to consider the tyranny of its master an everyday affair, they had none of them any conception of the canker of resentment which ate into Vivian’s heart. They thought her a moody little thing, laughed at her tantrums, and mocked at her absorption in Eugène. Without meaning to be unkind, they teased her unmercifully and were amused when she quarrelled with them. In their several ways, they were all of them imperceptive, and insensitive enough to make it impossible for them to understand why anyone should be hurt by their cheerful brutality.

Ok, I really do want to know who'd win a fight between the Penhallows and the Earnshaws (of Wuthering Heights). They both sound delightful!

Also, my first prediction (early hope) for this book is:

Vivian kills them all with the boot brush in the scullery.

At least, I couldn't blame her.