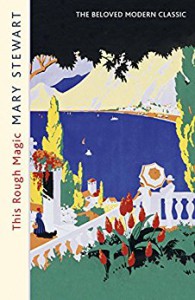 I laughed at her. ‘You should be like me, and get your jewellery you-know-where. Then you could lose the lot down on the beach, and not worry about Leo’s beating you.’

‘If that was all I thought would happen,’ said Phyllida, with a spice of her usual self, ‘I’d probably enjoy it. But it’s his mother.’

This. This is the sort of throw-away comment that pops up through-out the book that makes me cringe. It's not just dated, it's not even funny.

And the description of women in this book is just down-right insulting:

Phyllida was described earlier as the stereotypical hysterical female. She forgot her valuable diamond ring in a plastic bag at the beach, then blamed her male friend who retrieved her things from the beach for not noticing the bag. This was right after they discovered the body. He tried to help comfort her and not make her go back to the place where they found the body. He had no reason to know that the plastic bag was hers.

How in the world is it his fault she lost the bloody ring?!

Our main character - Lucy - is little better. She over-dramatises everything and is so naive, I'm not even sure how she even manages any social interaction. She's not TSTL exactly but she's really, really childlike.

And then we have the dolphin. Stewart - through Lucy's eyes - tries to make the dolphin out to be some sort of magical sea monster.

Don't get me wrong, I also hold dolphins to be magical in numerous ways, but our poor excuse for a heroine needs to get over it and accept that it is a dolphin, not the Kraken.

The bundle stirred. As my breath whistled sharply in, I saw, in the torchlight, the gleam of a living eye. But then in the split half-second that prevented me from screaming, I saw what – not who – this was. It was the dolphin.

The eye moved, watching me. The tail stirred again, as if trying to beat movement out of the hard earth as it would from water. It struck the edge of the crisping ripples with a splash that seemed to echo right up the rocks.

I tiptoed closer, under the blackness of the pines. ‘Darling?’ I said softly. ‘What’s the matter? Are you hurt?’

The creature lay still, unblinking, the eye liquid and watchful. It was silly to look, as I did, for recognition, but at least I could see no fear of me. I shone the torch carefully over the big body. There seemed to be no wound, or mark of any kind. I examined the sand round about. There was no blood, only a wide, dragged wake where the animal had been hauled or thrown out of the water.