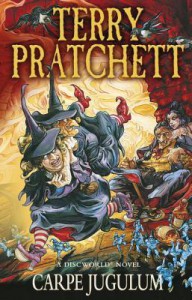 Oh, wow, politics and an invasion of dark forces over Lancre!!!

‘And our Wayne said they tries to turn folk against other religions,’ she went on. ‘Since they opened up that mission of theirs even the Offlerians have upped sticks and gone. I mean, it’s one thing saying you’ve got the best god, but sayin’ it’s the only real one is a bit of a cheek, in my opinion. I know where I can find at least two any day of the week. And they say everyone starts out bad and only gets good by believin’ in Om, which is frankly damn nonsense. I mean, look at your little girl— What’s her name going to be, now . . .?’

‘Everyone will know in twenty minutes, Nanny,’ said Verence smoothly.

‘Hah!’ Nanny’s tone made it clear that Radio Ogg disapproved of this news management. ‘Well, look . . . the worst she could put her little hand up to at her age is a few grubby nappies and keepin’ you awake at night. That’s hardly sinful, to my mind.’

‘But you’ve never objected to the Gloomy Brethren, Nanny. Or to the Wonderers. And the Balancing Monks come through here all the time.’

‘But none of them object to me,’ said Nanny.

Verence turned. He was finding this disconcerting. He knew Nanny Ogg very well, but mainly as the person standing just behind Granny Weatherwax and smiling a lot.

It was hard to deal with an angry Ogg.

‘I really think you’re taking this too much to heart, Mrs Ogg,’ he said.

‘Granny Weatherwax won’t like it!’ Nanny played the trump card.

To her horror, it didn’t seem to have the desired effect.

‘Granny Weatherwax isn’t King, Mrs Ogg,’ said Verence. ‘And the world is changing. There is a new order. Once upon a time trolls were monsters that ate people but now, thanks to the endeavours of men, and of course trolls, of goodwill and peaceful intent, we get along very well and I hope we understand each other. This is no longer a time when little kingdoms need only worry about little concerns.

This seems rather dark and I am really enjoying this aspect.

Also, can I just mention how much it cracks me up when Nigel Planer performs Verence in the style of Prince Charles?