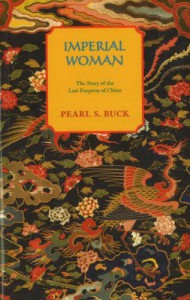 My friend sent me this book without warning. She thought I might like it, and she was right.

Imperial Woman was a fascinating story of the Chinese Dowager Empress Cixi, or Tsu-Hsi as she's called in the book. Cixi joins the court of the Emperor as a concubine and manages to become the main influence over the Emperor, and eventually Empress - by means that are sometimes ruthless, sometimes kind, but always with the goal in sight of extrapolating herself from a position of servitude.

Buck's portrayal of Cixi was fascinating. It cannot have been easy to create even a fictional character in such a lifelike fashion when the characters life depended on her keeping her thoughts and feelings to herself, and whose legend is blurred by rumours and superstitions that were rife during her reign, and where a breach of confidentiality or a breach of loyalty may well have carried a death sentence.

I had some issues with the book after the first half, where the story dragged a little and where I got a bit lost in trying to figure out how and why Buck wanted to force a love story into a plot that was already filled with political intrigue, suspense, historical events, and fascinating tidbits about life at the Chinese court during the late Qing dynasty. It just didn't need a love story that may or may not be based on historical fact. To me this just distracted from Cixi's mission to restore China as a respected, economically autonomous country, free from the colonial grip of the 8 Nation Alliance.

This historical setting, the discussion of China's struggle against the powers that tried to claim China as their own, was what made the book stand out for me.

Buck challenged the notions of colonialism from an unusual perspective. She does not paint China, or the Chinese court in any case, through a romanticised view by any stretch - there were plenty of descriptions that made me wince - but I thoroughly enjoyed reading this story from a point of view that does not presume the respectability and civility of the Western European governments as part of the story. The issues of colonialism were fascinating in this book. The only other aspect that eclipsed this for me was Buck's portrayal of a woman in a man's world, trying to save a bankrupt empire from disaster. Even though some of the historical events are given in general terms rather than details, this was an informative, entertaining, and though-provoking work of historical fiction.