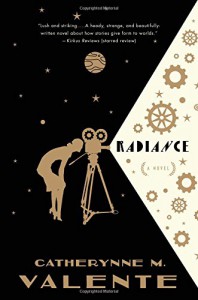 But whose rule is this? What Moses came down from the mount with such a thing engraved upon his personal stone?

Surely, our current state could not have been the shining future meant by those early masters of light and sound.

It is Edison's rule, enforced not by the Burning Bush but by Lawyers Burning for Their Fees. The name of Edison has become synonymous with the dastardliest of business practices, the most crushing arrogance. It stains the whole family, from Thomas Alva, who collected patents like baseball cards, to Our Present Edison, who continues such draconian strategies that he has, single-handedly, retarded the progress of motion picture technology by fifty years.

Your humble host has taken out editorials of this sort before. My readers must forbear. Given the upcoming Worlds' Fair in the glorious metropolis of Guan Yu, overlooking the glittering shores of Yellowknife Bay on our dear sister planet of Mars, the very first to be hosted off-world, what better time can there be for Mr Franklin R. Edison (Freddy to his friends) to release his parents' vice grip on reel, recording, and exhibition equipment and allow talking pictures to run wild and free? That is, after all, the natural state of technology. And so it was, once upon a time. Before the right to speak, the privilege of the voice, became the property of one man, to give and take away as he pleases.

What a fabulous premise, that the advancement of media, and thus the advancement of other aspects of modern life have been hindered by the enforcement of patents. In turn, I guess, this may have provided the people in this story to invest time in other parts of life - like space travel.

As with Space Opera, I'm finding it hard to put this book down. I really don't like sci-fi in general, but apart from the story being set in various locations on the planets closest to Earth, there is little science involved. It is more of an alternative history and a story about the creation of reality through the lens of the media than a story about space travel, and I am really enjoying this.

Besides, the 1930s Hollywood feel to the story is brilliant.

Valente really has become an author I need to read more of.