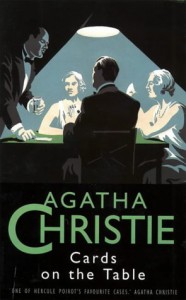 I need a comfort read to recover from all the sadness of The Man in the Iron Mask. A good murder should do it.

Mrs Ariadne Oliver was extremely well-known as one of the foremost writers of detective and other sensational stories. She wrote chatty (if not particularly grammatical) articles on The Tendency of the Criminal; Famous Crimes Passionnels; Murder for Love v. Murder for Gain. She was also a hot-headed feminist, and when any murder of importance was occupying space in the Press there was sure to be an interview with Mrs Oliver, and it was mentioned that Mrs Oliver had said, ‘Now if a woman were the head of Scotland Yard!’ She was an earnest believer in woman’s intuition.

For the rest she was an agreeable woman of middle age, handsome in a rather untidy fashion with fine eyes, substantial shoulders and a large quantity of rebellious grey hair with which she was continually experimenting.

If Ariadne can't make me laugh, nobody can!