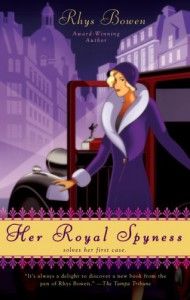 I had never actually seen a dead body before and I stared at him in fascination. He can’t really be dead, I told myself. It’s some kind of macabre French joke, or he’s trying to frighten me. Or maybe he’s sleeping. But his eyes were open and staring vacantly at the ceiling.

Sleeping? He's submerged in a bathtub. Fully clothed. And in cold water as the author has already told us that no one knows how to light the boiler.

I was just about ready to throw in the towel when we finally had some movement in the plot. Not great, and I am not convinced the whole mystery can be developed and solved within little more than half the book, which is all that is left.

Also, this is decidedly more "chick lit" than mystery, at least in my book.

Still why is the book called "Her Royal Spyness"? No spying has occurred. Charring, dusting, disguising, but no spying. :(