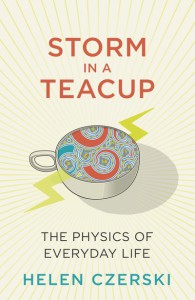 There is sometimes a bit of snobbery about the science found in kitchens and gardens and city streets. It's seen as something to occupy children with, a trivial distraction which is important for the young, but no real use to adults. An adult might buy a book about how the universe works, and that's seen as being a proper adult topic. But that attitude misses something very important: the same physics applies everywhere. A toaster can teach you about some of the most fundamental laws of physics, and the benefit of a toaster is that you've probably got one, and you can see it working for yourself. Physics is awesome precisely because the same patterns are universal: they exist both in the kitchen and in the furthest reaches of the universe.

I love this approach.

So far, I have also

- gained some new appreciation for my toaster,

- thought about the different shades of cabbage,

- considered that gyros are also used under water but that her example of the Hubble telescope was really good,

- have observed the conservation of angular momentum using the egg test with the result that I will have an omelette for dinner, and

- I have asked myself several times now whether it is too early to admire the fluorescent sparkle of one of my favourite drinks. I think the answer is still yes, but we will see if that changes later on.

Considering this has only been the Introduction, I am thrilled to move on to the Popcorn chapter.