Sherlock Holmes: The Adventure of the Copper Beeches

Our gas was lit and shone on the white cloth and glimmer of china and metal, for the table had not been cleared yet. Sherlock Holmes had been silent all the morning, dipping continuously into the advertisement columns of a succession of papers until at last, having apparently given up his search, he had emerged in no very sweet temper to lecture me upon my literary shortcomings.

“At the same time,” he remarked after a pause, during which he had sat puffing at his long pipe and gazing down into the fire, “you can hardly be open to a charge of sensationalism, for out of these cases which you have been so kind as to interest yourself in, a fair proportion do not treat of crime, in its legal sense, at all." 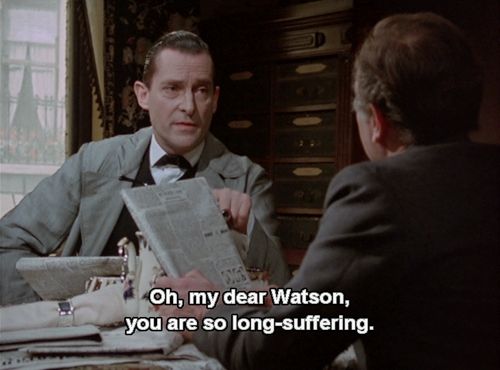 But as we all know by now, Holmes usually gets in a bad temper only when he is bored or frustrated.

When we meet our detecting duo at the beginning of The Adventure of the Copper Beeches, Holmes' work is stagnating ... hence the temper tantrum. Holmes believes that his skills are not employed for the detecting work he should be doing and that he is wasting his time with trivial cases that do not require any detecting at all.

“Pshaw, my dear fellow, what do the public, the great unobservant public, who could hardly tell a weaver by his tooth or a compositor by his left thumb, care about the finer shades of analysis and deduction! But, indeed, if you are trivial, I cannot blame you, for the days of the great cases are past. Man, or at least criminal man, has lost all enterprise and originality. As to my own little practice, it seems to be degenerating into an

agency for recovering lost lead pencils and giving advice to young ladies from boarding-schools. I think that I have touched bottom at last, however.

This note I had this morning marks my zero-point, I fancy. Read it!”

He tossed a crumpled letter across to me. It was dated from Montague Place upon the preceding evening, and ran thus:

“DEAR MR. HOLMES:--I am very anxious to consult you as to whether I should or should not accept a situation which has been offered to me as governess. I shall call at half-past ten to-morrow if I do not inconvenience you. Yours faithfully,

I sympathise. Many of us have probably been in a similar situation. What followed in Holmes' case was quite funny - he interviewed the young lady and basically dismissed her case as being not worthy of his time.

Two weeks later, he receives a telegram from the very same lady asking for his immediate help.

If ever some fan comes up with using the Holmes stories as parables for a motivational self-help book, I hope they're using this story for the chapter on "not missing opportunities when they present themselves".

[Btw, if you are that fan who now wants to write that self-help book, feel free, but please don't send me an ARC to review ... it is the kind of book I would loathe to pick up.]

What follows is a trip for Holmes and Watson into the country to meet up with Miss Hunter and figure out why her employers are such oddballs.

As far as Holmes stories go, this is not a favourite. There are some themes in stories that are repeated throughout the Holmes canon - some better than other. This one essentially follows the same theme as The Speckled Band but is nowhere near as gripping or interesting.