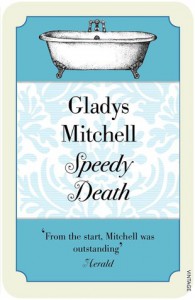 Alastair Bing’s guests gather around his dining table at Chaynings, a charming country manor. But one seat, belonging to the legendary explorer Everard Mountjoy, remains empty.

I have been reading this series out of order and only now got around to reading the first book, Speedy Death. I am not convinced it is necessary to read the series in order, but to get a better understanding of the main character, the unconventioal Mrs Bradley, you need to read Speedy Death. Much of the rest of the series will appear in a different light.

At least, it does for me now.

Mostly, because I did not expect the turns that Speedy Death took - especially towards the end.

‘By heavens, Brenner,’ said the Chief Constable, slapping his knee, ‘some intelligence has been used here!’

I am not going to reveal many plot details as I found it hugely enjoyable to know very little about the story - even if basically EVERY book description gave away at least one of the twists. (Seriously, I'd advise you not to look at blurbs or GR or Amazon descriptions.)

Mitchell had fun writing this series and it absolutely show. I have been chuckling all the way through this book, and I could not help but wonder whether Mitchell deliberately created the character of Mrs Bradley as what I can only describe as the Anti-Marple!

All in all, there are a few digs at the detective stories, shilling shockers, and the conventions of "good society" that just cracked me up such as:

The leading counsel for the Crown, in a booming, plum-like voice which associated well with his girth, commenced his opening speech. It dealt chiefly with Mrs Bradley’s past life, and she learned some things which surprised her. ‘This man will make me blush in a minute,’ she thought, as the learned counsel referred to her for the fourth time as this ‘deservedly famous woman.’

The prisoner next went into the witness-box. The exquisite courtesy of Ferdinand to the accused made its impression on the jury, although they themselves were unaware of the fact.

‘I am not going to defend myself,’ said Mrs Bradley, as much at her ease as though she were addressing a mothers’ meeting on the subject of birth control, in the arguments for which she was extraordinarily well-versed.

You see, the bother with people of this class is that you can’t bully them as you would the cottagers. They are too well-educated, and too well-balanced, and they know that the police are hedged in and hampered and red-taped until it is a wonder we can do any work at all in the detection of criminals.

This was a fun read. It was twisted, it had red herrings, it had drama. I was guessing to the end (because I could not remember the story from the Diana Rigg tv series, and I can't even remember if the story had been changed). So, when the ending came, I was shocked (in a good way), had to laugh, and then went back to see if the clues were there. And, yes, they were.

Mitchell is no longer known among readers of mysteries. She is said to once have been as prominent as Christie and Sayers, but Mitchell's work has fallen out of publication for the most part, which is a shame because her characters and her stories had a certain sparkle, even if some of the plots of later novels are quite convoluted.