Death of an Airman 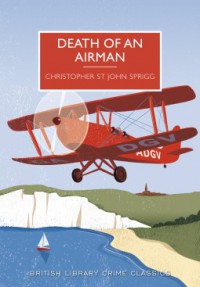 The two detectives looked at each other, and, after thanking Lady Laura, walked over to the hangars. “An intelligent girl,” said Creighton. “I don’t know why one is surprised when a good-looking woman has brains.

What a fun murder mystery! Death of an Airman had everything I like about Golden Age mysteries: eccentric characters, humour, technical detail that makes it fun to follow the puzzle,  red herrings galore, and a solution to the mystery that made it difficult to book down the book before the last page.

My favourite part was when Scotland Yard followed a lead that involved the covert sale of a French newspaper to "special order" customers in Glasgow which ended with the policemen being thrown out of the newsagents... I literally read this, giggled, and hoped that this would be more than a red herring.

A similar turn of plot in Death in the Tunnel had frustrated my reading experience of that book and I was relieved to find out that although there were a lot of similarities between the books, Death of an Airman was taking itself less seriously and, in consequence, was a much more enjoyable read. I laughed on several occasions, but I was also enjoying the hunt for clues and trying to figure out the mystery of how the victim was killed - because that was a real mystery for most of the book.

I wish we had many more works by Sprigg that we could discover, but Sprigg died at the age of 30 after had joined the Spanish Civil War. Had he lived, I wonder whether he would have injected some more of that irreverence and fun that made Death of an Airman such a joy into the rest of the mystery genre. Don't get me wrong, I love the Golden Age mystery reads, but instead of the xenophobia and snobbery that sometimes seems to run through these books, I would have loved to have seen more of Sprigg's tone of voice:

"Any convictions against the woman in your records?”

“Nothing serious. Dangerous driving, of course, and a narrow escape from a manslaughter conviction, but this type of reckless individual may always get involved in that kind of thing. They think it’s their duty to drive about the streets like maniacs. Oh, there’s a fine for assault when she bashed a fellow over the head with her ice-hockey stick for making some uncomplimentary remark about the sportsmanship of women players. It was perhaps excusable.”