The Deceased Miss Blackwell and her Not-So-Imaginary Friends 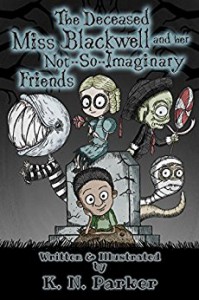 There once was a young boy named Martin who loved all things occult. When boys his age were interested in toy cars, video games and things more normal, young Martin, however, was interested in things much more insane.
He was a weird one, he was, taking nightly strolls around his local cemetery, an activity all the locals thought was a strange thing for a boy of his age to be doing. But he did not care, for it was something that gave him great pleasure and joy. It may be the very reason why he had little to no close friends to speak of, but he was not ashamed of what he liked and was fine with his lot in life.

The Deceased Miss Blackwell and her Not-So-Imaginary Friends is K.N. Parker's new book about Martin, a boy, who is a bit of loner.

When he finds a book about the occult at the library, he finds a way to cast spells, and bring the dead back to life. Just what you need on the night before Halloween!

in doing so he strikes up a friendship of an unusual kind and we get to watch as the gory cuteness unfolds.

I really liked the story. I am not sure it is a children's story, as it is rather macabre, but I can see that it might appeal. For me, there were a few things not quite adding up, but it didn't detract from really enjoying the story and, especially, the illustrations.

I loved Philip most - what's not to love about a tentacled mummy? So cute!

As I said, it is a short read, but it was nice one to get into that Halloween mood.

**I tend not to accept free copies of books from authors in return for a review, but I wanted to make an exception for K.N. Parker because I received a copy of the book without any expectation of writing a review in return. Make of it what you will, but at least you know I got a copy of the book from the author for free.**