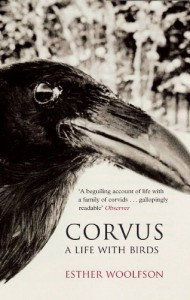 "A rook, Corvus frugilegus, named by Linnaeus in his great work Systema Naturae, a name meaning "food-gathering". (I had hoped it meant "frugal" because I enjoyed the idea of her being part of the tradition of rural Scottish frugality, but apparently it does not.) I say "her" but there was no method we knew of to identify her sex. We designated her female arbitrarily, discovering only last spring, when for the first time at the age of sixteen she laid two eggs, that we were correct.

We named her, a choice probably now too prosaic, too frivolous for the dignity she's attained. It was derived from a piece in the edition of the New Yorker I was reading at the time, mention of a drag artist called, I think, Madame Chickeboumskaya. Thus, she is Chicken."