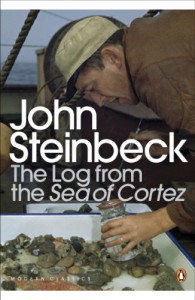 The medical kit had been given a good deal of thought. There were nembutal, butesin picrate for sunburn, a thousand two-grain quinine capsules, two-percent mercuric oxide salve for barnacle cuts, cathartics, ammonia, mercurochrome, iodine, alcaroid, and, last, some whisky for medicinal purposes. This did not survive our leave-taking, but since no one was ill on the whole trip, it may have done its job very well.

Steinbeck cracks me up. Here we have a book about a scientific expedition but he still injects some fun in it. So far, the science bits have been speculation and conjecture, but at the end of the day, Steinbeck was more of a poet than a marine biologist. Unlike Thoreau, tho, he knows it, too,