Von der Erde zum Mond / From the Earth to the Moon 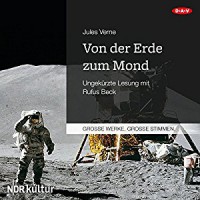 As for the Yankees, they had no other ambition than to take possession of this new continent of the sky, and to plant upon the summit of its highest elevation the star- spangled banner of the United States of America.

Yup, this is still my favourite quote. Simply because I cannot get over Verne daring to imagine that iconic tv image from 1969 in 1865.

There were a lot fun points that Verne picked up in this novel and made fun of, but sadly a lot of the satire in this novel is at the expense of the US, who is pretty much represented only by the characters of the Baltimore Gun Club, who out of boredom following the end of the Civil War, attempt to build a cannon that can reach the moon.

I enjoyed the poking fun at gun enthusiasts, I did not enjoy the poking fun at whole nation. There were some other stereotypes, too, French and German, but the majority of Verne's mockery was pointed firmly at the US.

Still, apart from the blatant stereotyping, this was a romp and fun, fun, fun diversion into imagining the impossible and then backing it up with science. Of course, we know now that the science was iffy, but it is conceivable that the readers in 1865 did not meet the book with our modern scepticism but with wonder and marvel. And I just love Verne's work for that. I would really love to know if anyone involved in space exploration was inspired by this book because I can totally see this being the case.

So, why not 5 stars? The sheer amount of maths and hypothesising about maths and physics, was just too much for me.

Oh, and, the cat ate the squirrel. I'm just not ok with that.