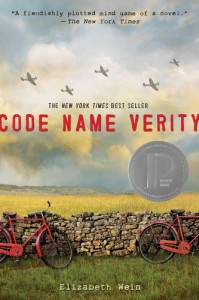 I AM A COWARD

I wanted to be heroic and I pretended I was. I have always been good at pretending. I spent the first twelve years of my life playing at the Battle of Stirling Bridge with my five big brothers, and even though I am a girl they let me be William Wallace, who is supposed to be one of our ancestors, because I did the most rousing battle speeches. God, I tried hard last week. My God, I tried. But now I know I am a coward. After the ridiculous deal I made with SS-Hauptsturmführer von Linden, I know I am a coward. And I’m going to give you anything you ask, everything I can remember. Absolutely Every Last Detail.

This was impressive. I had kept putting off reading Code Name Verity because I had no idea this was a YA novel when I got it, and when I found out that it was, my heart sank.

However, despite my reservations and some initial concern about the voice of the narrator, I could hardly put the book down. Sure, there are things you can pick apart, but in the end this was a tough spy story - and very much an adventure story that was engaging both mind and gut. And the latter was utterly wrenched.

Maybe it's because I have overdosed a little on Bond recently and a spy thriller from a female perspective was just what I needed as an anti-dote, or maybe it's because Wein takes great care with details without bragging about her research, or maybe it's because it's just nice to read a story about WWII that is not all about patriotism or nationalism or the clear division of good and evil, but this was a nice change of pace from my recent encounters with espionage thrillers.