Crow: From the Life and the Songs of the Crow 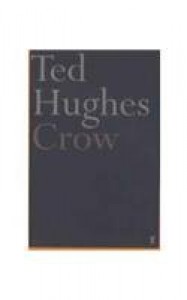 With all your self-obsessed aloofness,

your lack of empathy and whimsy,

you're a misrepresentation of all crows.

Ah, well, it was only a matter of time before I crossed paths with Ted Hughes' work. Let's just say that just because something is clever, and Hughes' work is CLEVER, it doesn't mean it captures my heart? That is not its aim. Imagination? Definitely not. Interest? No, not that either.

Well, maybe with one exception:

The cartridges were banging off, as planned,
The fingers were keeping things going
According to excitement and orders.
The unhurt eyes were full of deadliness.
The bullets pursued their courses
Through clods of stone, earth, and skin,
Through intestines pocket-books, brains, hair, teeth
According to Universal laws
And mouths cried "Mamma"
From sudden traps of calculus,
Theorems wrenched men in two,
Shock-severed eyes watched blood
Squandering as from a drain-pipe
Into the blanks between the stars.
Faces slammed down into clay
As for the making of a life-mask
Knew that even on the sun's surface
They could not be learning more or more to the point
Reality was giving it's lesson,
Its mishmash of scripture and physics,
With here, brains in hands, for example,
And there, legs in a treetop.
There was no escape except into death.
And still it went on--it outlasted
Many prayers, many a proved watch
Many bodies in excellent trim,
Till the explosives ran out
And sheer weariness supervened
And what was left looked round at what was left.