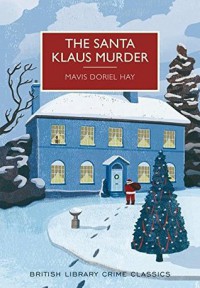 I was inspired by Moonlight Reader to pick this up. The Santa Klaus Murder is another installment of the British Library Crime Classics series that focuses on works by authors of the Golden Age of Mystery, who have been largely neglected in favour of such giants of the genre as Agatha Christie, Dorothy L. Sayers, Gladys Mitchell, et. al.

The Santa Klaus Murder is set in a typical mystery setting: a country house, a family gathering for the holidays, a murder that was impossible to take place, and a lot of red herrings.

The story had all the markings of a perfectly cozy read, except....there were some darker themes that meandered through the book that gave this mystery an air of interest beyond the pure fun of solving the puzzle.

For example, one of the characters is suffering from PTSD, or shell-shock, and one of the interesting aspects of the novel was how his family cope with his altered self.

However, the topic was not given as much depth as for example Sayer's allocated to it in the Lord Peter Wimsey novels. Altogether, The Santa Klaus Murder remained a diversion, a light read.

As for the mystery, ... it dragged a bit and thanks to the incompetence of the investigators, some of the conclusions seemed a bit far-fetched. I would rather have all the facts and try and piece them together than be presented with new evidence just as the case is wrapped up. It always seems to be too convenient to the author (rather than the characters) when a conclusion is rushed.

One other note, tho, I loved the language that is used in this book. I could not decide whether it was just quaint or actually funny. The passing of time since its original publication in 1936 may have a lot to do with it, but some of the expressions that were used really made me smile.

Once Jenny reached the door she was so quick that I couldn’t help see her rush at him and throw herself incontinently into his arms.