First Among Sequels (Thursday Next # 5) 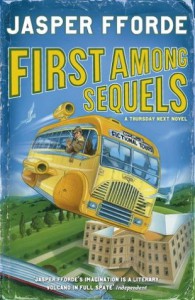 ‘Incredibly enough, reality TV has just got worse.’ ‘Is that possible?’ I asked. ‘Wasn’t Celebrity Trainee Pathologist the pits?’ I thought for a moment. ‘Actually, Whose Life Support Do We Switch Off ? was worse. Or maybe Sell Your Granny. Wow, the choice these days makes it all so tricky to decide.’

Bowden laughed. ‘I’ll agree that Granny lowered the bar for distasteful programme makers everywhere, but RTA-TV, never one to shirk from a challenge, have devised Samaritan Kidney Swap. Ten renal failure patients take it in turns to convince a tissue-typed donor – and the voting viewers – which one should have his spare kidney.’ I groaned. Reality TV was to me the worst form of entertainment – the modern equivalent of paying sixpence to watch lunatics howling at the walls down at the local madhouse. I shook my head sadly. ‘What’s wrong with a good book?’ I asked.

Indeed. What is wrong with a good book? This question goes to the heart of the plot of First Among Sequels. A plot, I should add, that doesn't actually become clear until well into the second third of the book, which for an impatient and plot-loving reader like me, made for rather frustrating reading of most of the book.

Multiple storylines were hinted at throughout the book, but only a few, were actually followed through with in this installment of the Thursday Next series, and one that grabbed my interest in particular was revealed to be addressed only in the next book. That is, maybe. If the author can be bothered to remember.

It's the same situation again as with one of the main twists (the one relating to Pickwick) in Lost in a Good Book (book # 2 in the series), which is not actually addressed again until Something Rotten (book # 4). I understand that this structuring of the story is supposed to keep the series alive, but it makes for a rather unsatisfying reading experience, especially so when most of the book just feels like a filler until the next installment.

What adds to my disappointment with the book is that Fforde changed some of the characters, and it is not clear if this was by design so it fits with the amended backstory

(where Thursday is now the author of books #1 through #4)

, or whether the continuity errors are simply because neither author nor editor could be bothered.

For example, we have Stig's attitude towards chimera's described as follows:

‘Don’t move,’ said Stig in a low rumble, ‘we don’t want to hurt it.’ He never did. Stig saw any renegade unextinctee as something akin to family, and always caught them alive, if possible. On the other hand, chimeras, a hotchpotch of the hobby sequencer’s art, were another matter – he dispatched them without mercy, and without pain.

However, one of the most poignant scenes of the previous book, describes Stig as far more complex and contradicts the statement that Stig did not care for chimera:

The Neanderthal moved closer and held the creature’s grubby hand as its life ebbed away. ‘Sometimes,’ said the Neanderthal softly, ‘sometimes, the innocent must suffer.’

‘Every time we do this it’s like killing one of our own,’ said Stiggins softly.

This is only one example of the changes, but a poignant one. Others would provide spoilers for the previous books, but suffice it to say that Thursday's attitude towards Pickwick and other characters is far from what I would expect from the Thursday of books #1 through #4.

I got the impression that by one of the plot twists, Fforde tried to explain some of the break with the previous books by justifying the existence of books #1 through #4, but he does it in such a convoluted way, that it makes it difficult to follow.

"I wanted the series to be a thought-provoking romp around literature; books for people who like stories or stories for people who like books. It wasn’t to be. The first four in the series had been less light-hearted chroniclings of my adventures and more ‘Dirty Harry meets Fanny Hill’, but with a good deal more sex and violence."

It also does not answer the more fundamental question of why he includes this plot twist in the first place.

Again, the plotting of this book just really did not work for me. Nor did some of the characters, especially Thursday1-4. The break with the previous books just does not work, and there is not enough explanation of why Thursday1-4 is the way she is. The whole concept of each version of Thursday being a part of each other version just does not work if each version is not given the capability to act like another version. Fforde tried to do it, but not convincingly - a case of too little too late.

Which leaves me with the one redeeming point of the book: the writing. As much as the plot and characters irked me, it is difficult to put a Thursday book down. The story may be convoluted and the characters confused, but in the end, Fforde's imaginative plea for the celebration of literature and his expressions of love for the written and spoken word are nothing but awesome:

The book may be the delivery medium but what we’re actually peddling here is story. Humans like stories. Humans need stories. Stories are good. Stories work. Story clarifies and captures the essence of the human spirit. Story, in all its forms – of life, of love, of knowledge – has marked the upward surge of mankind. And story, you mark my words, will be with the last human to draw breath, and we should be there, supporting that one last person.